(Zerohedge) – Update (1353ET): A standoff between Massachusetts police and heavily armed men, known as ‘Rise of the Moors,’ ended this afternoon after 11 were arrested.

A group of heavily armed men, known as ‘Rise of the Moors,’ in full combat gear, have prompted police Saturday morning north of Boston to shut down a stretch of Interstate 95.

The standoff began around 0200 ET when police pulled over two cars on I-95 between Lynnfield and Stoneham. About eight to 10 men were dressed in combat gear armed to the teeth with long guns and pistols, Massachusetts State Police Col. Christopher Mason said.

Mason said when the men refused to put their weapons down or comply with authorities’ orders, they said the group ‘does not recognize our laws.’ The men then sprinted into a wooded area, where two men have been arrested.

Two suspects have been arrested by members of @NEMLEC on North Ave, Wakefield. MSP has taken custody of and transported them to one of our barracks. The situation is ongoing w/remaining members of the group. We continue to work to resolve the situation peacefully. https://t.co/1bZWM1vYKS

‘No threats were made, but these men should be considered armed and dangerous,’ Wakefield police said. ‘We are asking residents in these areas to lock their doors and remain inside their homes. A heavy police presence will be in this area as well.’

Here’s a view of the incident scene along the stretch of highway.

Police are using negotiators to speak with the remaining suspects. ‘Time is our ally in this and we will certainly utilize this,’ Mason said. 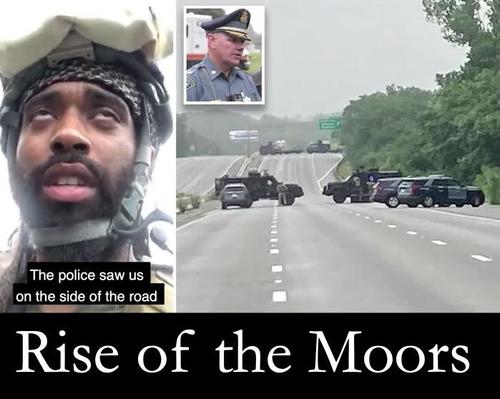 The men claim to be part of a group called ‘The Rise of The Moors’ and American nationals but not US citizens. They published several videos of the standoff on their YouTube channel ‘Rise of the Moors’ early Saturday morning about their take on the standoff. In full combat gear, one individual cites specific US federal government laws that underline they’re not breaking any rules.

In another video, the individual, who appears to be the leader, provides another update on how the incident began around 0200 ET.

The man says, ‘we are abiding by the peaceful journey laws of the United States of Federal Courts.’ He also cites a supreme court case decision that specifies ‘merely carrying an arm’ or ‘carrying a gun constitutes no offense.’